Do you remember the book that made you fall in love with reading?

For me, it is something that is constantly changing. I had a wonderful and burgeoning relationship with reading but Perks of Being a Wallflower made me fall in love with reading. I read it at the perfect time of my life, a time when I needed to read something like it. High School.

Do you remember where you were when you realized that reading was your favorite hobby?

I do, once again I was in high school. It was in P.E. class, my teacher had told us that it was running day. My least favorite kind of activity, running a mile for absolutely no reason. My teacher, I can’t remember their name now because I don’t care to remember. Unless they were a teacher that let me read, I don’t much recall their names. I decided that I didn’t want to run the mile that day, I wanted to sit in the shade of a tree and read. I was well into the Lord of the Rings trilogy and didn’t want to put it down. I failed that class.

I remember mine. City Lights bookstore in San Francisco, California. The first time I peaked in from the street outside, I knew it was somewhere that would always welcome me and keep me warm. I was fourteen years old.

If you’ve never been to City Lights, that is okay. Let me paint a quick picture for you. A bright picture full of dark wood and squeaking floors, staircases and bookcases filled to the brim. Best sellers alongside zines alongside Poetry. When I first stepped foot inside I knew that it was special – I also didn’t know anything yet about the history for which I had just stepped my foot into. 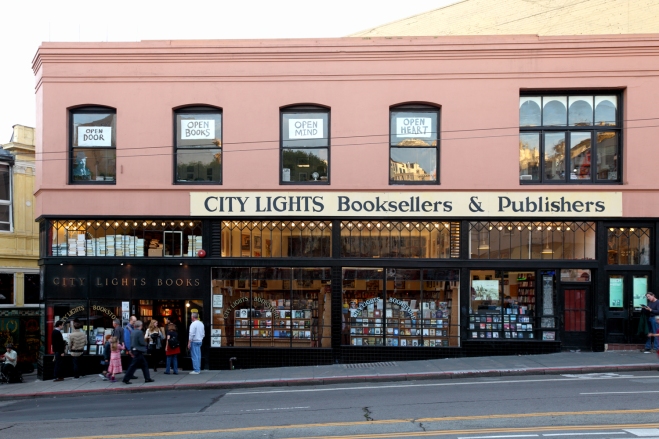 The majesty of City Lights truly started when Peter D. Martin sold his shares of their “Pocket Book Shop” to Poet Lawrence Ferlinghetti.  The Poet launched the printing press shortly thereafter, garnering attention after publishing Howl by Allen Ginsberg. Some people would say that Howl “made” City Lights and while I have no doubt that something else could have come along and eventually pave the way for City Lights to be successful; still Howl and Ginsberg came around at just the right time for the printing press. The national notoriety of a obscenity trial led to incredible sales for the book of Poetry. Also, the verdict for the trial was unprecedented for the time, the judge settled that the contents of the book were not obscene and protected by the first Amendment. It truly paved the way for more and more ground breaking works to eventually be published, through City Lights and other publishers.

You can’t talk about the history of City Lights without talking about the Beats, the Bohemian Hedonists who liberated literature post WWII. With their jazz cigarettes and rejection of materialism. When I first walked into City Lights I had no idea what the Beat Generation was or who it consisted of. When I got home from my first whirlwind visit to San Francisco I began to read and learn. I realized that I recognized one of the names, Jack Kerouac. I don’t even know how I knew it, I hadn’t read any of his books or poems yet but I already knew him. I will always regard this time in my life important in the very formation of certain core beliefs that I still definitely hold in my personal life. Leftist themes, sexual/racial liberation, opposition to militarization of government, rejection of cultural norms.

High school was a very confusing time for me, being told what to do at all times while simultaneously trying to become your own person. I came back in Sophomore year not wanting to be there one bit. I wanted to hit the road, I wanted to work shit jobs for little money and write. Of course I carried that youthful stubbornness everywhere that I went without much logical thinking. I could have connected the dots but instead I ignored them. Even the Beats, revered by all manor of hippies met at Columbia University. The Inkings at Oxford. Do you see a theme?

I didn’t care about any of that, all I wanted to do was absorb everything. I read On the Road. I read Naked Lunch. I read The Dharma Bums and yes, I read a lot of Ginsberg because I didn’t know a lot of what I know now back then. The 2000’s were a simpler time when all I wanted to do was breathe in every piece of influential literature I could.

I left that trip to San Francisco with one very clear goal: I was going to move to San Francisco when I got older. I wrote those words in a journal of mine that I was keeping at the time. I’ve never been great at keeping goals but I am glad to say that I kept that one.

Fast forward to October 2009, I packed up most of my possessions (which weren’t much to speak of) into my best friends’s Mom’s car and she drove me up to San Francisco to live with my best friend, Chelsea. I owe so many things to Chelsea, like a bed for one thing. I moved up to my dream city with no job, no bed, no bookcase, no dresser to keep my clothes in; she gave me most of those things. I didn’t care that I didn’t have anything, I was finally in San Francisco. The apartment was everything that I could have ever dreamed of, and the bookstore that inspired me to move to the bustling city was just a bus ride away.

The five years that I lived and worked in San Francisco were some of the most difficult of my life. While I worked for a company that I love and still work for but I was working on commission only and most people know and understand now that San Francisco is the most expensive city in the United States to live in. Often times I would have entire paychecks go towards rent. What little money I had left over went right back to Ferlinghetti and his bookstore.

I cherished my days off when I would get on the 38 Geary towards Downtown, get off at Powell and walk the rest of the way. Weave through Chinatown, grab some fresh lychee and walk down Jack Kerouac Alley to spend the next few hours sitting in Poetry room, reading the first thing my eyes landed on.

In my last few days living in California, I took the Bart into the City (I was in living in Oakland at the time) and just spent a few hours wandering around the city. I wanted to hear everything, see everything that I could before I left. I didn’t know when I would be back. I took the snapshot above in Jack Kerouac Alley before going inside City Lights. I stepped in, smiled at the clerk and turned to my right, looking into the main room of the shop. I remember pausing for a moment, looking through the main core of the store; the black and white tiled floor, the curved archway – all the way back to the staircase that lead to the Poetry room. I remember feeling incredibly proud of myself for the things I had accomplished in this city. I felt overwhelmed with love for the people I met and for the bookstore I was standing in. City Lights helped me realize that I wanted more than what I had grown up with. I wanted busy, stressful, insane city life and that was exactly what I got. No matter how crazy or maddening life got however, City Lights was always a constant.

One bookstore in a city full of amazing bookstores. That little corner of the city was an oasis that I hope to get back to sometime soon.

In A Sea of City Lights

One thought on “In A Sea of City Lights”